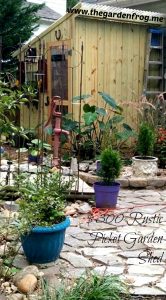 This is my cute rustic shed in the suburbs. This was my secret shed because in my subdivision the sheds are supposed to look like the house, be placed where the HOA says you can put it, and it is preferred to be designed and built by professionals.

plus I had a big problem…

A shed would have to built in the back yard and where my HOA would tell me to put it…well, I have a pond, beds of flowers, trees, and shrubs, and the biggest reason — I did not want to see my shed from my windows.

I have wanted-no needed- a shed for a long time

Our 1 car garage is supposed to be our workshop but it also had to house the lawnmower, power washer, my projects, and other various items that belong in a shed. The garage was a HOT MESS and I could not take it any longer. I had to convince my then husband of the fence picket idea but when I dragged him to Home Depot that weekend to see the 6′ & 8′ fence pickets and show him my vision. It helped that I showed him the sheds in the parking lot were not built any different than my plans. He agreed to help me and I was so excited. 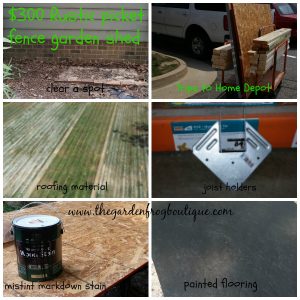 Of course, I had to bribe him with brownies and other promises of love and affection…after almost 18 years of marriage, he could not say no. It took me a while (and in this case a few months of coaxing and talking about a new shed) and I had to hear several times during our build how “we are not carpenters!”

I am DIYer with a vision…

I also wanted a project with minimal cutting and easy for most DIYers to do. I will try to be descriptive on the plans and some of the pics have measurements for the size that would fit in our space plus that would enable us to use 8′ 2x4s for the roof at a 15 degree angle.

The materials list is what I used for the garden shed 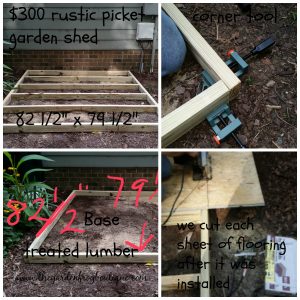 The frame had center supports 24″ apart and from the picture you can see the size of the shed was 82 1/2″ x 79 1/2″ which was a result of measuring the pickets out to avoid cutting any of them. After we built the frame for the floor, we laid the 4×8 sheet on the base and cut it. We find it is easier to cut it on the frame and to skip dragging it across the yard to the work area.

The height of the shed was determined by the picket height of 6′ and 8′ available at The Home Depot. The roof angle ended up being 15 degree angle cuts for the front pickets. We used plywood for the back of the shed because the shed was backed up against the garage (which I will build the next one with pickets all the way around). 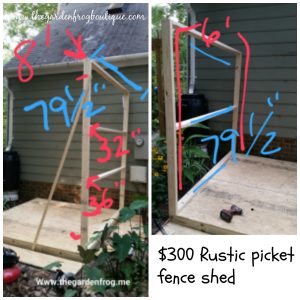 fence pickets along the top, middle, and bottom of the 2x4s wall frames. I chose to put the middle 2×4 brace at 3′ because the wall was 6′ and the opposite side I put one at 3′ and the other 2′ above that. Our measurements are specific to this shed and can be changed to make the shed larger or smaller.

To make sure the outside pickets were the same height all the way around we used a short 2×4 as a guide to nail on the fence pickets (as shown in picture). We also had to brace the shed to keep it square before we could apply the fence pickets as siding.

We messed up at one point and forgot to put the back boards on so we had to draw a line where we had screwed on the wall framing and pull forward to attach the back boards. Then we carefully pushed the shed 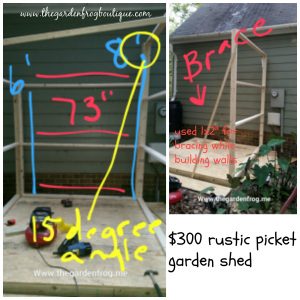 back and screwed the walls back in place. That is why I work with screws – so when I mess up all I have to do is unscrew and start again.

Once the walls were up I put on the roof joists. Since I am not a carpenter I laid out the corrugated roofing panels and overlapped them to get the right width for the shed. I then screwed the roof joists at the measurements of the corrugaged roofing so that the downward groove of the roof would touch the 2×4 and I could screw on the roof on.   I left over hang on the front and back of shed for water run off. I used special screws with a rubber washer for the roofing and screwed down until the rubber seal squishes out and before you crack the roofing.

I did the roof myself so I could not take pictures. I used a ladder on the inside of the shed after putting one sheet of roofing up at a time. It was 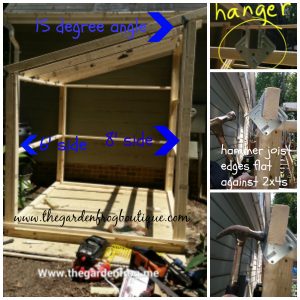 Next before I finished framing door, I discovered I had to add more supports for roof not to sag. The roof supports were perpendicular to the joists and gave me more support in case of snow or pounding rain.

The screen door I found in the markdown area for less than $15. We happened to have heavy duty hinges so we added a 2×4 to on the right front to start framing in the front and door. we put the screen door in 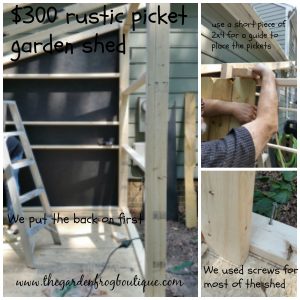 and then later I built the framing around it. The 2x4s were not exactly straight so i made sure the screen door looks straight and compromised on the rest of the framing for the front. I measured for the door and put in the 2×4 header across and secured. I also added another 2×4 in the middle to repeat what the other walls looked like to attach pickets. I knew I needed to cut at 15 degree angle and so I measure to put in first picket. each picket after that starting from the left corner was another 1 1/2″ larger. I always measured to be sure. I also added a firring strip as stop for the screen door making it flush with the picket siding

The screen door I found in the markdown area and even though it has issues it works and to somewhat weatherproof it I cut and screwed on the inside of screen door the lat piece of corrugated roofing. I also happened to have heavy duty hinges and a gate latch I wanted to use 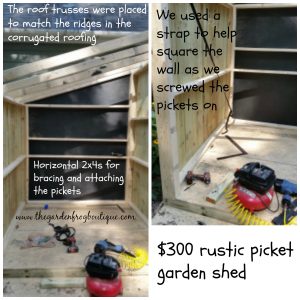 that I found in the garage.

Framing the screen door was improvising with pieces of 2×4 and 1×2 strips. It took a bit of figuring to get the door to and framing to look straight since some of the 2x4s were not exactly straight. After the door frame was done and screen door hung I then hung the pickets cutting them at 15 degree angles to match the roof line.

These directions are not exact and we did a lot of improvising but this shed stood for 2 1/2 years until I had to sell it. The one word of advice I have is to buy your pickets and let them dry out for a couple weeks or more. We did not do this so after a few months the pickets shrank and 1/4-1/2″ gaps appeared.

This was one of my projects I did before I started blogging as a hobby. I 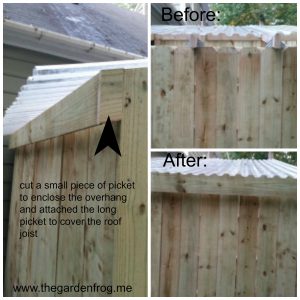 know now to take step by step pictures and video to make it simpler for my audience. One day I hope to build another garden shed and give even more detailed directions. Until then, I hope I have given you enough direction to build your little garden rustic garden shed.

Thanks for stopping by and feel free to contact me with any questions.

Creating. Inspiring. Gardening without the rules! 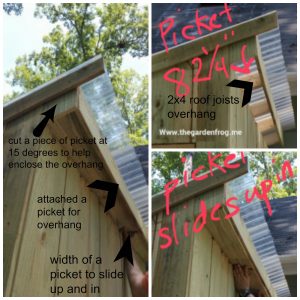 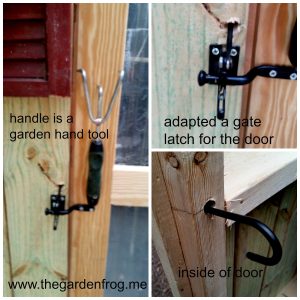